Remember the oil narrative of 2022? It went something like this:

There was no shortage of terrifying headlines…

“Here’s How Much Oil Could Go Up in a Worst-Case Scenario with the West Freezing Russia out, BofA Says. It’s a Lot” – Fortune, March 7, 2022[ii]

“Bank of America Predicts that a Ban on Russian Oil Exports Could Push Prices as High as $200 a Barrel – and Breaks Down Why This Could Trigger a Global Recession or Stock Market Crash” – Business Insider, March 7, 2022

If you bother reading any of the articles above, you’ll find the big banks – JP Morgan, Bank of America, Goldman Sachs, Barclay’s – were predicting $200+ per barrel of oil. That was the narrative. Most people don’t keep track of the cost of a barrel of oil. They track prices according to what BP or Shell charges them per gallon. Some context here: $200 per barrel of oil would be very, very bad. Cataclysmically bad, probably. Hard to say exactly, we’ve never seen it before. Oil’s all time high price was $145/barrel in 2008.[vi] That was bad for the economy in 2008. We’ve never seen $200. That would be worse.

Here’s a chart of the price of crude oil from the beginning to the end of 2022:[vii] 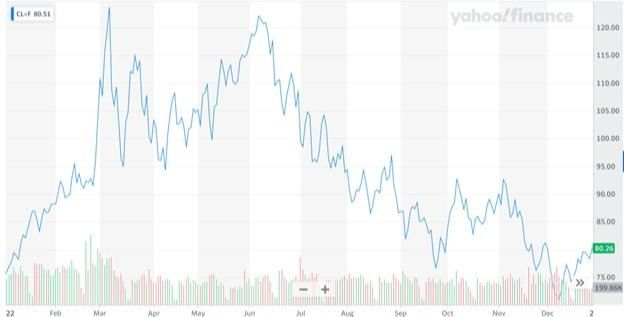 You may have noticed most of the articles mentioned above predicting $200/barrel were published on or around March 7th.

$200/barrel, huh? Feels like I’m watching Ricky Vaughn on the hill. Juuuuust a bit outside.

By the end of November oil prices made the full round trip back to where they were to begin the year.

The number of articles published that noted this fact… zero? I can’t find any. Does this one count?

All the news outlets and all the banks were saying the same thing on March 7th of this year. Some variation of:

Can you imagine someone writing in the midst of the $200/barrel mania in March, something along the lines of:

“Eh, I think this is probably the top” or “I suspect prices will be back to where they were in January before the end of the year.”

Funny thing – recall the premises of the narrative driving the dire $200/barrel predictions. They all hinged on the U.S. and Europe banning Russian oil. Those premises turned out to be accurate.

But the conclusion… completely wrong.