There are a lot of things to be said about the recent blowup of the crypto exchange FTX. I suspect much of it is irrelevant to the readers of this blog. I don’t think they have much invested in the crypto space. I’m happy about that.

A lesson on custody.

One question everyone should ask their financial advisor is, “who has custody of my money?” Custody is the jargony finance term for “possession.”

Another way to phrase that question is, if you are managing my money do you have possession of my money?

The answer should be a resounding “No.”

Anything short of an unequivocal “No” and you should stand up out of your chair and walk out of that advisor’s office. Or run out of the office. That works too. If you’re on a Zoom call, navigate your mouse over the red “end call” button at the bottom of your screen and initiate a stern left click.

If they do, they might be tempted to do all sorts of nefarious things. The kinds of things that benefit the person/institution with possession of your money at your own expense. The sort of things they make movies about. The sort of thing the CEO of FTX, Sam Bankman-Fried (“SBF”), seems to have done.

You probably saw the news. A crypto exchange called FTX blew up recently. It appears SBF and FTX had custody (possession) of their clients’ funds, which SBF then lent to his hedge fund, Alameda Research, to make all kinds of speculative bets seeking to profit himself. Including it appears playing US election betting markets (the Financial Times reported an obscure illiquid asset entitled TRUMPLOSE worth $7,394,877 on FTX’s balance sheet).[i]  The scheme works as long as all the customers don’t demand their money back at once. But if suddenly a lot of people all want their money back and the dollars aren’t there because most of it has been lost making speculative bets on cryptocurrencies and elections… Well then the scheme falls apart. Which appears to be approximately what happened.

Do you know what would have deterred SBF from gambling with his customer’s money?

Not having possession of their money.

That is – back to finance parlance – utilizing a third-party or independent custodian. 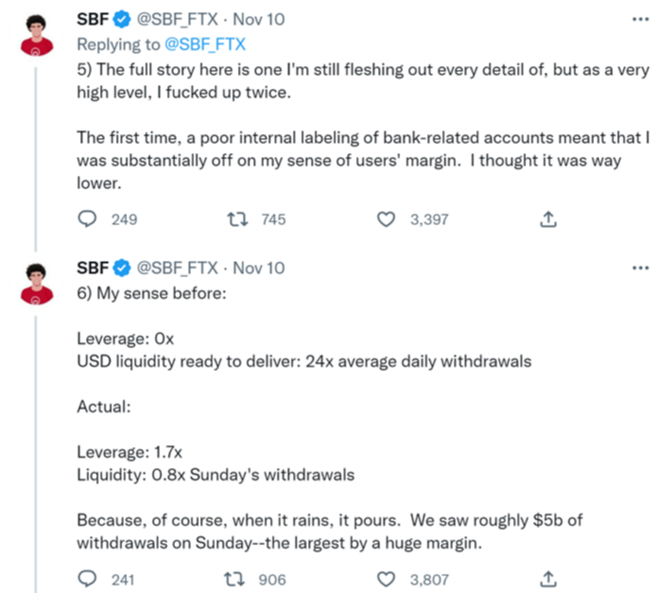 You see it was a “poor internal labeling of bank-related accounts” that caused him to be unaware of his users’ margin.

Poor internal labelling? What, was he keeping track of this on the back of a napkin by his computer? Perhaps he set his drink down on the napkin and some condensation made the 9 look like a 7?

When you have a third-party custodian, that third-party has possession of the funds, which means the manager of the funds can’t lend them out to be gambled by his proprietary hedge fund. Or engage in any other means of theft. A third-party custodian also generates all the tidy (and accurate) reports showing the exact amount of “user’s margin” and other important information like balances and activity in the account without the possibility of “poor internal labeling.”.

This brings to mind an interesting quote:

Those are the words of Bernie Madoff, the architect of the most famous Ponzi scheme in history.* His scheme worked because he had custody of his clients’ (victims’) assets.

When customers wanted to invest with Madoff – and many did given his “track record” – they wrote a check to Madoff Investments. Bernie deposited that check in an account he owned and controlled. If clients wanted to see their “performance,” he generated a report from Madoff Investments that showed “great returns” and the clients were happy.

But he could manipulate those reports to say whatever he wanted. There was no annoying independent custodian checking his math. Perhaps after he was caught he would have called it poor internal labeling. He could take your money and go on a nice vacation and then email you an account statement from Madoff Investments showing a nice 10% YTD return. All while sipping Pina Coladas on the beach on your dime. He was the custodian. He could do what he wanted with the money. He had possession of it. The reports said what he wanted them to say. If you’re a scumbag with no integrity and a penchant for stealing other people’s money, it’s a pretty good gig.

There is a very simple rule for someone who wishes to avoid an unscrupulous advisor stealing his money.

Don’t give it to him.

If the advisor doesn’t have custody (possession) of his clients’ funds, and he wishes to engage in some unscrupulous behavior he will have to clear it with the third-party custodian. He will have to ask the custodian to transfer funds from a client’s account to an account he controls. Or doctor some financial statements. Or personally loan him funds using his clients’ funds as collateral. And the custodian will say something like “no” or “absolutely not” or “I’m calling the SEC.” And that will be likely be followed by FBI agents at the advisor’s door saying something along the lines of “we have a warrant for your arrest” and “you have the right to remain silent.”

We, at Resolute Wealth Management, utilize Fidelity and Charles Schwab as our independent custodians. We are “multi-custodial” if you’ll excuse one last bit of lingo. We have discretionary power to make investment decisions in the accounts we manage pursuant to our fiduciary duty to the owner(s) of said accounts. But we don’t have possession of the funds. Fidelity and Schwab do. They generate reports showing the activity and balances in the accounts that are sent directly to our clients.

That’s the way it should be.

Neither asset allocation nor diversification guarantee against investment loss. All investments and investment strategies involve risk, including loss of principal.

Content here is for illustrative and educational purposes only. It is not legal, tax, or individualized financial advice; nor is it a recommendation to buy, sell, or hold any specific security, or engage in any specific trading strategy. Results will vary. Past performance is no indication of future results or success. Market conditions change continuously.

This commentary reflects the personal opinions, viewpoints, and analyses of Resolute Wealth Management. It does not necessarily represent those of RFG Advisory, clients, or employees. This commentary should be regarded as a description of advisory services provided by Resolute Wealth Management or RFG Advisory, or performance returns of any client. The views reflected in the commentary are subject to change at any time without notice.